Even after years and years of print buying: dealing with everything from 4.5 million brochures for Toymaster (www.toymaster.co.uk) to 250 business cards for our lawyers, every now and then a problem crops up that few have ever experienced. And it happened to us in the run up to Christmas with the Penhaligons (www.penhaligons.com) Christmas catalogue which, sod’s law being what it is, was already running late.

The catalogue, designed this time round by the French agency, featured a special metallic gold as the overall background colour which needed to be printed as a fifth colour. Nothing particularly unusual about that and something we’ve seen many times in the past.

The digital proofs all looked fine and were approved with barely a tweak and all looked rosey. Until…

Two days after 60,000 copies had been delivered – and well-received by the client (and four days after the final sheets were printed) a strange “shadow” appeared on some of the pages. First reaction was that it must be set-off – the result of wet sheets sitting on top of each other and the image transferring from one sheet to the one above. But, on closer inspection, the “shadows” didn’t match anything as obvious as that so it couldn’t be set-off.

After a bit of judicious “wiggling under a light” and “holding it up to the window” to get a better view we realised it was the outline of the image on the other side of the sheet.

After a deal of sleuthing we identified the cause as a very rare issue called “gas ghosting”. We’d never heard of it but it turns out to be a chemical reaction associated with designs that call for heavy coverage of metallic inks whereby the ink on the opposite side of the sheet is prevented from drying in the conventional way because of a combination of the sealer varnish and the metallic ink.

It takes a day or two to kick in and then reduces over time. And there’s no known solution – apart from changing the design.

Even had there been time to reprint the catalogue without jeopardising the entire Christmas sales period we would have achieved much the same result.

You might think that leaving the sheets to dry between coats was an option but:

All we could do in the end was negotiate a discount and bear it in mind for the future.

Mind you, despite the amount of energy and anxiety expended by us, the client and the printers, not a single customer commented on it. 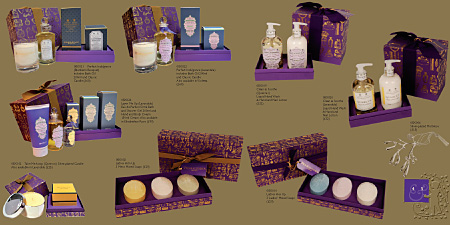 16 thoughts on “Gas Ghosting – Well I never knew that”